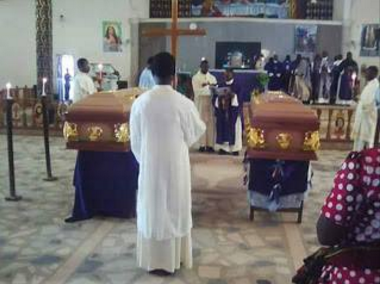 In their classic style they burnt  down homes, destroyed food items and killed at will.

The police seem to know nothing of the attacks which have been going on in other villages within Benue State since the Anti Open Grazing Law came into effect last year.

Many people are asking why the International community has remained silent over the massacre of Benue citizens?

The answer is simple: It has been the goal of the Jihadists to conquer Benue and Tiv people who resisted their advance into the middle belt and the Eastern part of Nigeria since 1804, the people who rejected Islam and fought for the unification of Nigeria in the civil war of 1967 - 1970.

The people of  Eastern Nigeria therefore have little sympathy for Benue people who fought on the side of Nigeria .
The Muslim North is enjoying a sweet revenge overshadowed by an insensitive regime.

There were over 170.000 internally displaced persons before the Naka invasion and surely with the current situation in Mbalom , Benue will be flooded with thousands more.

What cannot be said at this point is the consequences of the death of Missionaries in the silent killings that have been ignored  by the government for over a year.

The Catholic Diocese of Makurdi  , which is one of the largest Dioceses in Nigeria, has been active in providing relief materials including education and skills acquisition lessons.

To go for the Priests means total destruction of everything we stand for and believe in, as a people!