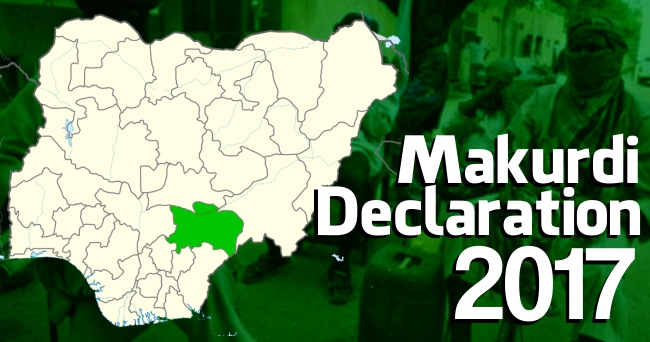 The Centre for Research and Management, Benue State University, having noted that thousands of people of the Central Nigerian States are being killed, with thousands more suffering debilitating injuries; communities being destroyed and hundreds of thousands being displaced from their ancestral homes; and concerned at the deteriorating security situation and the real threat of hunger and starvation in Nigeria as a result of the attacks on the farming communities in the region, which is the food basket region of Nigeria, decided to convene a conference to critically examine the unfolding violence and to explore solutions against the terror.

Members of the academia, the community of Middle Belt intelligentsia, human rights and community activists, community organisations, members of the media and government officials attended the conference. During the conference lasting for two days, several experts presented well researched papers, and participants held incisive discussions on the attacks on communities in the Middle Belt region.

Participants noted that between 2010 and 2017 the activities of herdsmen have posed existential threat to the communities in Central Nigeria. Over 5,000 lives have been lost with over 100,000 internally displaced people through attacks by Fulani militias operating in the Middle Belt region. Many communities have been dispersed and their people thrown into confusion, thereby breaking the cohesion of communities and threatening the survival of the People.

The Conference noted that Fulani herdsmen who follow and fight alongside their militias occupy the lands from which they violently and murderously evict our people, and that security forces and the government thereafter take steps to secure the Fulani possession of the occupied lands.

The conference expressed deep concern over attempts by some northern power groups to use the Fulani militia to destroy Middle Belt communities as a prelude to forcibly enslaving the people and incorporating the region into a delusional North that has never truly existed; whereupon they would become part of a fake Arewa Republic in the unfortunate event of a break up of the present Nigerian Federation. Conference notes that people from the far north calling for the dismemberment of Nigeria are backing the agenda of Boko Haram to break up Nigeria if they fail to establish an Islamic state in Nigeria.

Conference observed that rampaging Fulani attacks on farmlands and houses of the people of Central Nigeria are coordinated with the support of the government’s security agencies, which watch on while the Fulani attack the unarmed communities. The indigenous people have become victims without protection from the government. Casualties have always been the indigenous people in their ancestral homes.

Participants noted that majority of the herdsmen terrorists are migrants from Chad, Niger, and other Fulani enclaves across our borders. A small percentage of these Fulani youths are Nigerians born in the states where they reside. They are the ones vested with the responsibility of leading the rampaging killers on their regular mission of murder, rape, arson, despoliation and rapine; serving as compasses to the blood-hungry hounds of terror and Global Jihad.

From the empirical facts that emerged, the Conference concluded that it is incorrect to see the genocidal attacks by the Fulani militia on the peoples of the Middle Belt as a “herdsmen/farmers conflict”, but an invasion by the Fulani to conquer and occupy the ancestral lands of the Middle belt communities and to appropriate the usufructuary rights to such lands to themselves by force of arms. Conference further noted that our people have no quarrel with the Fulani and have never attacked them. It is the Fulani who deploy heavily armed troops to invade peaceful and unarmed communities, decapitating children, cutting open pregnant women, destroying the communities, their farmlands and causing hunger and starvation. It is therefore deliberate genocide.

Without doubt, the activities of the violent herdsmen who are killing and maiming their hosts in the guise of grazing their herds, represent the greatest threat to Nigeria’s national security and survival. Apart from the blood-curdling exploits of the Boko Haram insurgents and the renewed sabotage of oil facilities by militants of the Niger Delta, the herdsmen’s menace has the potential to undo the fragile unity of Nigeria if not well handled. This must never be allowed.

The widespread killing by herdsmen is a governance problem and considerate leadership is required to address this. Much of the solution, of course, lies in restructuring of the Nigerian state so that the country can be stronger and united. Nigerians want peace and confrontations can be defused by means of restructuring into a federation that harnesses the diversity of the people for the wellbeing of all. The level of discontent across sections of Nigeria is unnerving. Nigeria is being held down as a result of mass discontent. A perception that the Fulani have some exclusive right to graze anywhere is worrisome.

Besides, there is nothing stopping businessmen and farmers in various parts of Nigeria from developing their own cattle ranches to cater for local consumption. That is business. That is how to develop an economy. And that is one way to allay the fears of many Nigerians who see more than a quest for cattle grazing in the prevailing killings by the herdsmen.

Government approach to managing security challenges and especially the herdsmen’s attacks has been reactionary ways and impulsive, and has degraded the confidence of the Middle Belt in the government.

Developed nations employ mountain/forest rangers to protect areas less visited by the general population. In addition to our weak borders, we do not have any special forces guarding these areas spread across the nation. Recent reports of kidnap and robbery of citizens travelling through forest region by alleged nomads is a pointer to why Nigeria needs special policing for our forests and mountains.

The participants established that the people of the central Nigeria region believe in the Nigeria project and the agenda for development. They acknowledged and commend government’s response to the activities of Boko Haram in the North East and other parts of Nigeria. As a region, the people deserve security and protection of lives and property. Unfortunately, the conference noticed with dismay, the silence of the Federal Government on the genocide on the people as worrisome. Conference also noted with dismay the utter silence of the northern political class and intellectuals over the massacres perpetrated by the Fulani militia in the Middle Belt. That is why people of the Middle Belt find allusions to a “one North” by the northern Hausa Fulani ruling class a patently hypocritical.
Similarly, the virtual silence and lack of response by the international community to the carnage and genocidal killings in Central Nigeria is also a worry to the people. The people have appealed that UN Mission cover should also be extended to Central Nigeria.

We make bold to say that no one should tell a people who face an existential threat to their very survival, not to defend themselves, a principle enshrined in the sacred precepts of the Law of Nations since Hugo Grotius.

In view of the above, therefore, Conference reached the following resolutions:

While our people are willing to enter into dialogue with any group on the security situation in the region, the patent insincerity and the deceptiveness of the so-called dialogue sponsored by allies and agents of the violent pastoralists, the Middle Belt communities should insist on the following conditions for proper dialogue to take place:

All provocations and attacks on all communities must cease.

No attacks will take place during and after the dialogue.

The actual attackers will be brought to the round table.

The government will produce the sponsors and leaders of the Fulani militia and bring them to the dialogue table.

The Fulani must vacate all lands occupied by Fulani following the attacks and the owners of the lands returned to their villages, towns and communities.

Fulani who have been permanent residents in the Middle Belt before 2010 should be represented at the dialogue by their leaders known to the communities, without any intimidation, threats or pressures by the leaders and sponsors of the Fulani militia.

Representatives of the Communities at the dialogue sessions shall be the leaders of Community Development Associations at whatever level the dialogue is being held (District, Chiefdom, Local Government, State).