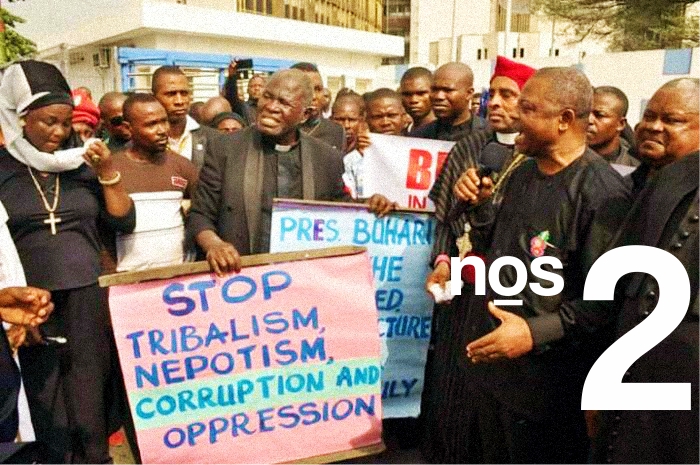 Section 14 (3) of the 1999 Constitution of the Federal Republic of Nigeria, (as amended) states as follows:

“The composition of the Government of the Federation or any of its agencies and the conduct of its affairs shall be carried out in such a manner as to reflect the federal character of Nigeria and the need to promote national unity, and also to command national loyalty, thereby ensuring that there shall be no predominance of persons from a few State or from a few ethnic or other sectional groups in that Government or in any of its agencies.”

In total violation of this Constitutional provision, appointments into critical sectors of governance have been concentrated in the hands of Muslims from the Hausa/Fulani ethnic group to the exclusion of the other parts of the country. This is unfair, unjust, and inequitable. The question is why should this be so? Is this part of the grand design to ensure that a particular religion and a section of the country should dominate the others?

Critical appointments in Security and Education are configured as follows:

The appointments to head Education are as follows:

While it is true that 17 new appointments were made in August 2016 in the Federal Ministry of Education while four Chief Executives of educational agencies were permitted to retain their positions, we find it disturbing that all the critical positions in education in Nigeria are headed by Muslims, particularly Muslims from a section of the country. Presently, Universities, Polytechnics, Colleges of Education, Primary Schools, Educational Research and so on, are headed by a section of the country. Clearly, these appointments are disturbing violations of the Federal Character Principle in Section 14 (3) of the Nigerian Constitution. Should we keep quiet and accept it, thus? Is it not clear to any discerning mind that those behind these sectional appointments have ulterior motives? If Christian communities are attacked, to whom shall they turn to for protection? Could this explain the failure of the security agencies to arrest and prosecute the assailants?

Nigeria received independence as a Democratic nation. Currently, it carries a Democratic Constitution which is meant to guarantee Justice, Equity, and Fairness. Unfortunately, the reverse seems to be the case. Nigeria is fast becoming a totalitarian country in which Islam seems to be the preferred religion and Muslims from the North are the approved leaders. When the nation decided to adopt this structure is unknown to us.

Therefore, it is time to SPEAK OUT.

Every Christian leader must set Sunday 19th March, 2017 aside and join in the National Christian Prayers and Mourning. A stitch in time saves nine.