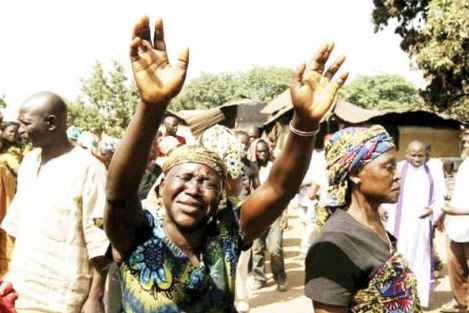 To:  All Christians in Nigeria and Diaspora.

I bring you greetings in the precious name of our Redeemer and Savior Jesus Christ, Amen. I have been directed by the President of the Christian Association of Nigeria (CAN) Rev. Dr. Samson Olasupo A Ayokunle to bring to your attention the on-going ethnic/religious cleansing of Nigerian Christians in general and those of southern Kaduna in particular in the last few weeks.

Though the church in Nigeria since 2009 has been subjected to a systemic genocide and persecution through the instrumentality of Islamic fundamentalists Boko Haram, leading to the killing of thousands of Christians and destruction of hundreds of churches, and over 50,000 houses but the current unprecedented onslaught against Christians in southern Kaduna by the Islamic fundamentalists disguising as the Fulani herdsmen under the watch of Kaduna state governor, Mallam Nasir El-Rufai  and President Muhammadu Buhari has reached an alarming stage.

While we commend President Muhammadu Buhari for waging war against Boko Haram fundamentalists since his Assumption of office, his silence over the on-going genocide in the last few weeks speaks volume over the perceived official endorsement of the dastardly and ungodly acts. The recent defense of the President's silence that the President has received briefing from the governor of Kaduna State over the matter is unacceptable because the Presidency knows that the people of the affected area had already protested against the governor's unacceptable biased handling of the continuous killings. Common sense tells anyone that at that instance, the President has to more directly wade in because lives are involved. The continuous killings have shown that the Governor of Kaduna State lacks the will power to arrest the situation and bring it under effective control.

We know that southern Kaduna has been under 24-hour curfew daily as directed by the governor, yet the enemies of the people are still prowling going from house to house killing defenseless people without government protection. The security operatives in the area appear to be turning blind eyes to the killings. They only rush to trouble spots after the perpetrators of the evils had performed their enterprise of killings and destruction of houses and farmlands.

CAN has previously drawn attention to the imbalance in the appointments made in our security Institutions, hence we re-emphasize that leadership/ management of security institutions both at the national and state levels be reviewed to ensure a balance of Muslim and Christian Representation. Such balance, will build trust and confidence among all citizens of Nigeria in the Security empowered to protect our nation.

We implore the state and federal government to increase their efforts in putting an end to these killings and as well ensure that those behind the killings are brought to book under the laws of our land and those affected to be compensated.

In view of the present predicament, the President of CAN has directed that Sunday January 8 2017, should be declared national day of mourning by Christians including those in Diaspora. We are to pray fervently for our southern Kaduna brothers and sisters who are victims of these wanton killings and also for the peace of our dear country Nigeria.

Therefore, all Christians are directed to dress in mourning attire of black clothes or dresses in all our church services on January 8, 2017. We are to pray that God who delivered the Jews from Haman should deliver Christians from Hamans in Nigeria.

Not only that, all celebrations/merriments associated with the New Year are to be done low key in solidarity with our brethren in southern Kaduna who had lost their lives and who have been denied the privilege of celebrating the yuletide. An injustice to one is an injustice to all. Each State Chairman of Christian Association of Nigeria should also address the press either on the 1st or 8th of January reading out the contents of this release. May God deliver our Land from the forces of darkness on rampage in Jesus' name, amen.

All Christians in Nigeria and on the global scene should speak against this ethnic/religious cleansing to wake up the Nigerian security agencies from their deliberate slumber to carry out  their responsibilities.

It is our prayer that the souls of all those that were slaughtered to rest in perfect peace. We pray that God will heal the wounds of their loved ones and all those that they left behind, and that God will strengthen and avenge them in the shortest time possible, for our God will never abandon or forsake His people. May we be comforted that help is on the way, let us completely trust and depend on Him holding on to His promises for our God is mighty and powerful and He will surely deliver us.