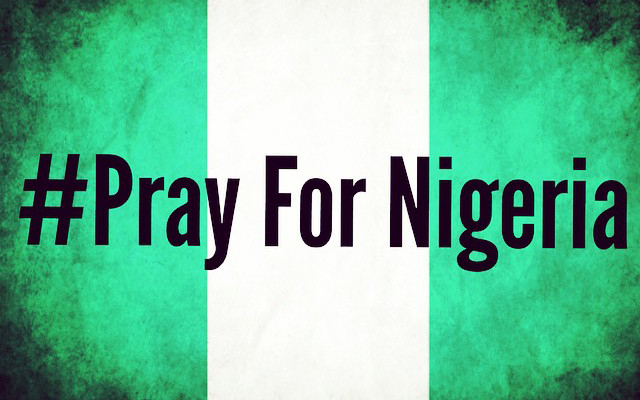 Beloved in Christ, a few weeks back as I prayed about the trouble facing Nigerian Christians I received this message:

1) The battle against Islamic onslaught must be fought holistically and CAN, representing a United Church in Nigeria, must carry the central burden while other Churches and Christians should follow the pattern.

2) CAN should undertake the task at 4 levels throughout the nation namely:  a) National team to operate from Abuja, b) Regional teams to operate from each of the 6 geopolitical zones. c) State teams should operate from each of the 36 states of Nigeria and d) The Local Government teams should operate from the LGA's. Each team should comprise 21 committed believers to be divided into 7 sub-teams with one team standing in the gap together at the chosen operational place for 1 day in the 7 days of every week. The operational time is 1 hour from 00 hour to 3am every day, for as many days as it may take for this battle to be won.

3)  The Lord took me to Rev. 12: 9-11, and said: “Because this battle is against men possessed by wicked demons, your winning strategy is to engage the Blood of Jesus, and the Word, which is also the Name of Jesus”. Every word of command or testimony given in accordance with the Bible shall be executed by the Angels as long as we are in his name and are covered with the Blood. The blood speaks to remind God about his covenant with us especially the ones most relevant in this time.  The Blood also speaks justice for the righteous and judgment for the wicked. Again the Lord took me to Prov.18:10 and showed me that the name of the Lord here is the same as the house in Exod.12:12 in which the Israelites were commanded to remain for safety after applying the blood on the door post. He further showed me in Jn17:11 that this Name of the Lord for our dispensation is Jesus .This is further confirmed in Act.4:12 as the only name given for our victory in this era.
4)  Now, how do we come in as individuals?  This prayer will work at your level of influence. This could be family, clan, town, LGA, state, etc. Hence a man could volunteer to hold this in his home alone or with his wife. An Area pastor or Parish priest could organize the prayers at parish level by constituting a parish team of 21. One thing is required: prayer warriors must be Spirit filled men or women of proven integrity, who are commitment to Christ and must be willing to observe the appointed hour of prayer daily. They must be men who are willing to remain within the “House” as in Exodus 12:23 that are not living in disobedience to the word of God.

The prescribed weapon for this warfare is the Blood of Jesus, The name of Jesus and the Word in accordance with our covenant, spoken as a command or a testimony. This strategy is same as what God used against Egypt in Exodus chapter 12.This is because we are dealing with satanic hordes operating with human instruments just as Pharaoh and his army were overtaken by demonic blinders!

In Revelation 12:11, which actually is a revelation of Exodus 12, the Lord gave the principal weapon for this warfare: “They overcame him by the blood of the Lamb and the word of their testimony. They did not love their lives so much as to shrink from death” For more light on the last part of this verse, please see Luke 9:24: “For whoever wants to save his life will lose it, but whoever loses his life for me will save it.”

Beloved, God is looking for men who will stand in the gap and plead the covering of the Blood of Jesus at the appointed time over territories where they have influence. When the Blood covers a territory, it will enfold all within the territory and it will speak according to the terms of the covenant: blessings upon the righteous, those who are in the Name of the Lord and judgment against the wicked those outside the Name. All believers are hidden in the “HOUSE” which is the name of the Lord and their strong Tower (Prov. 18:10). From this vantage point they will pronounce the word against the satanic hordes, in agreement with the Blood of the covenant, and the angels of God will enforce them as the Sword of the Spirit.” (Eph. 6:17). Again as the blood enfolds the Nation because of the righteous, mercy will be extended to the repentant while judgment will be executed upon the wicked and unrepentant at your word. This is exactly what happened when Jehoshaphat was confronted by three Nations. 2 Chron. 20 This time we don’t have to go into any field. Just stay at your duty post at the appointed time and pray according to pattern. Please if you volunteer to be part of this army, which I believe will soon be enlarged to cover all the states of Nigeria, ensure that for the prescribed 1 hour you stick to the prayer pattern. Again the appointed time is 1 hour between zero hour and 3am daily for as long as victory tarries. Note: God will put a mark on the foreheads of those who sincerely participate in this exercise for specific rewards known to him alone! (Read Ezek. 9:1-4)