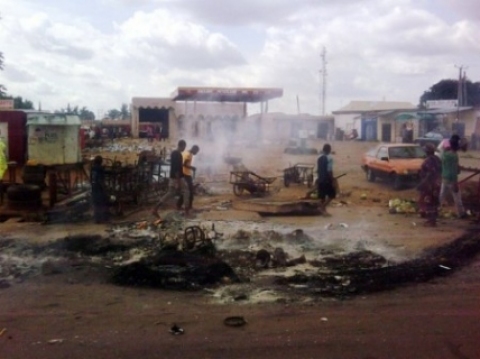 The Christians and a Muslim were killed in Kwaple village, Chibok Local Government Area of Borno state when the Islamic group members went on rampage and burned 20 houses and a Church in the area, while three Churches were burned in Gamboru Ngala.

“I have just received a message from my people at Chibok and Gamboru Ngala that four of our Churches were attacked by the militants this morning and 10 people killed at Kwaple in Chibok LGA,” the Borno State Chairman of the Christian Association of Nigeria, Rev. Titus Pona, said in a text message to the association’s president on Dec. 2.

Nuhu Clark, a former Chibok local government area council chairman, said the attackers entered the village at about 9 p.m. Saturday, then torched houses before using guns and machetes to kill their victims.

“Most of the victims were buried today,” Clark said on Sunday. “It is unfortunate that such could happen in such a peaceful village.”

“It is clearly an attack on Christians by the Boko Haram members in a local government that that is predominantly Christian,” said a Christian leader in the region, who requested anonymity because churches had agreed that only the Christian Association of Nigeria chairman would speak to the press. “The government is worried about the implication of this attack and is offering to support the rebuilding of the affected Churches.”

The State governor met Monday with state and local officials of the Christian association, the local government area council, and community leaders. They determined how to support the affected families.

“The affected families will be compensated, though life cannot be paid for,” said the anonymous Christian leader. “The attack by members of the Islamic group, who are apparently not from the community, was unjustified and we have the assurance of the government that necessary measures will be taken to prevent a reoccurrence.”

Sunday Oibe, spokesman for the northern group of the Christian Association of Nigeria, decried the continued attacks on Christians, which he said were not getting enough attention from the government.

“What people get to hear is just a fraction of the attacks Christians are subjected to,” Oibe said. “It is unfortunate that when the (Christian Association of Nigeria) president comments on the issue, they accuse him of not being sensitive or raising false alarm. We cannot continue to keep quiet in the face of provocative attacks like last Saturday’s attack in Borno.”

Borno State is the headquarters of the Boko Haram group that has launched various terrorist attacks in the country, killing hundreds.