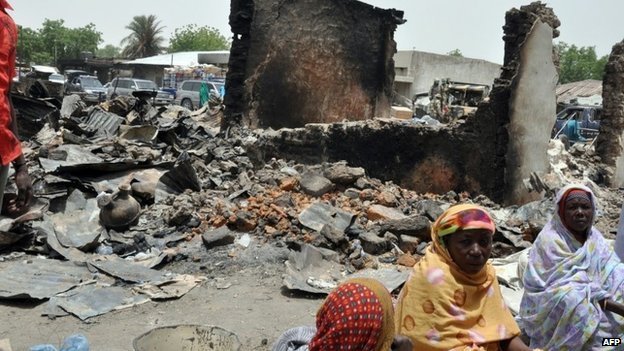 Maiduguri (Nigeria): Hundreds of people who escaped a Boko Haram attack on their town in Nigeria's restive north and fled to a nearby mountain have said they were without any food.

"We are in distress. We need help," said Liman Ngosha, a farmer yesterday from the town of Gwoza.

"We have been starving for the past four days. We are surviving now on wild fruits," he told AFP by phone from the Mandara mountain.

Suspected Boko Haram gunmen attacked the town, some 135 kilometres from the state capital of Maidugur, on Wednesday.

The raid left dozens dead and sent others fleeing to the mountain near the Cameroonian border.

Survivors said there were no soldiers to defend the town when the gunmen attacked before dawn.

"I cannot tell the exact number of people that were killed. Before I fled, over 100 corpses littered the streets of Gworza," Ngosha said.

The palace of the town's emir, the police headquarters and scores of other buildings were destroyed, residents said.

"Dozens of our people have been killed by the attackers. Some were slaughtered and many others shot with guns," resident James Mshelia told AFP.

Residents said the whereabouts of the Gwoza emir, Mohammad Idrissa Timta, was unknown. Timta succeeded his father, Mustapha Idrissa Timta, who was killed by Boko Haram insurgents in May.

"There is no military presence in Gwoza now," said Halima Jatau, one of the fleeing residents.

The attack on Gwoza came a few weeks after the insurgents took over Damboa, another town in the volatile state that is repeatedly attacked by the Islamist group.

Many Gwoza residents who escaped the attack, including some who fled to the mountain, met in Maiduguri yesterday with the state governor, Kashim Shettima, who promised to discuss their plight with President Goodluck Jonathan.

"I share your pain and I know the difficulty that you are going through. I want to assure you that I will relay what is happening to the president and I will seek his support in the deployment of more soldiers to Gwoza," he said.

Yesterday, police fired shots at a group of about 300 Gworza residents who had gathered in central Maiduguri to protest the Boko Haram attack, injuring a 26-year-old man.

The head of the state police, Lawan Tanko, later apologised to the protesters saying that the policeman who fired the shot that injured the man had been identified and would be tried and punished accordingly.