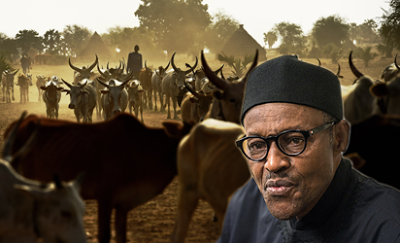 Centrum Initiative for Development and Fundamental Rights Advocacy, CEDRA, has observed with concern the impunity of Fulani herdsmen in parts of the country as a sign of a ‘letdown’ by the Federal Government of Nigeria, FGN, under President Muhammadu Buhari and his security goons.

“A horizontal and vertical perusal of opinion of pundits holds that the Federal Government of Nigeria can nip in the bud this menace,” CEDRA believes.

Dr John Danfulani, who is chairman of CEDRA, in a statement issued in Kaduna said, “FGN under Buhari only consciously decided not to see nor hear the Fulani Herdsmen terror that has attracted the attention of the global community.

“Sadly, when it comes to issues affecting Nigerians of different ethnic background, the same deaf, dumb, sluggish and inaction disposition of President Buhari disappears. He acts with speed of light, even if it means outright breaking the law or refusal to follow due process.

“We are witnesses to how he unlawfully labeled IPOB a terrorist group, and ordered invasion of some South East cities by the military under an operation codenamed Python Dance. It is clear that irredentism and bigotry dictates his actions and relationship with other Nigerians.

“The saddest dimension to this is the statement of the Inspector-General of Police, who ignored facts surrounding the pogrom and said the Benue massacre was a ‘communal clash.’ After his highly subjective and absurd claim, commanders of the ‘Butchers Of Benue’ advanced a different reason for their semi holocaust.

“They claimed they went on killing spree because their 1000 cows were stolen. If their tale-by-moonlight is true, what stopped them from deploying the same force and brutality on bandits that stole their cows? This is a classic case of transfer of aggression.

“Above all, is it permissible in our laws for people to take laws into their hands when a perceived wrong is meted on them?  With his disposition, how can IGP discharge his duties of law enforcement devoid of prejudices?

“While we accused the FGN of conscious refusal to liquidate our version of Janjaweed, we admit that some States’ chief executives are helpless due to lack of constitutional powers to command the security outfits in their domains.

“However, this does not include Governor Nasir Ahmed El-Rufai of Kaduna State, who admitted on 3rd and 21st of December, 2016, of interfacing with killers of Southern Kaduna people and even paid them compensations.

“It’s only in Governor El-Rufai’s alternative and fanatical world that killers of innocent people in foreign climes are compensated instead of extradited to face justice in countries where they committed crimes.

“Now that it’s incontrovertible that the FGN and some state governors have consciously developed cold feet to strangulating this systematic genocide by Fulani Herdsmen, we are calling on the leadership of the National Assembly to trigger the clause of emergency session and cut short their recess under matters of national importance to discuss the Fulani Herdsmen threat to national security.

“The National Assembly’s intervention is quintessential because Nigeria is a few inches away from a full blown civil war. There is no stressing the fact that statements from leaders of affected communities show that their backs are on the walls; and that, they have exhausted their barns of patience. And since the person and institutions constitutionally empowered to pull the brakes on the jajaweed-like gang are not willing to act accordingly, it’s good for the National Assembly to swiftly step in.

“Lest they forget, members of the National Assembly are representatives of the common folks and members of an institution with the power of checks-and-balances.

“They will be letting down millions of compatriots that are looking up to them for protection, if they tarry or also pretend neither to see nor hear this evil. Simply put, honourable and distinguished men and women of the Green and Red chambers should help us stop an impending civil war that has the capacity to spell the greatest post Second World War humanitarian crisis.

“From 23rd December, 2017, to 6th January, 2018, Middle-Belt communities of Southern Kaduna and Benue State witnessed barbaric lethal assaults by Fulani Herdsmen – a terrorist group listed by world bodies as the fourth deadliest group in the world.

“In Southern Kaduna, a zone that has suffered protracted Fulani Herdsmen terrorism, communities were assaulted, many were massacred and scores wounded on the Eve of Christmas.

“Shortly after that, a First-class chief of Numana Chiefdom and his pregnant wife were cowardly murdered and the paramount ruler of Ikulu Kingdom kidnapped at his residence.

“While the hue and cry of their savagery in Southern Kaduna was glowing, the same blood thirsty beasts opened a deadlier front in Benue State. Horrific pictures of their Benue victims, who are mostly defenseless women and innocent children hoisted in old and new media, are still giving people terrible nightmares. As I write, the beasts are still operating in the Benue front with impunity.

“Aside Southern Kaduna and Benue incidences, there were others in Taraba, Adamawa, Niger and Plateau, and a pocket of states and communities south of River Niger. Lives terminating and properties destroying skirmishes in these States and communities were triggered by the same marauding Fulani Herdsmen.”