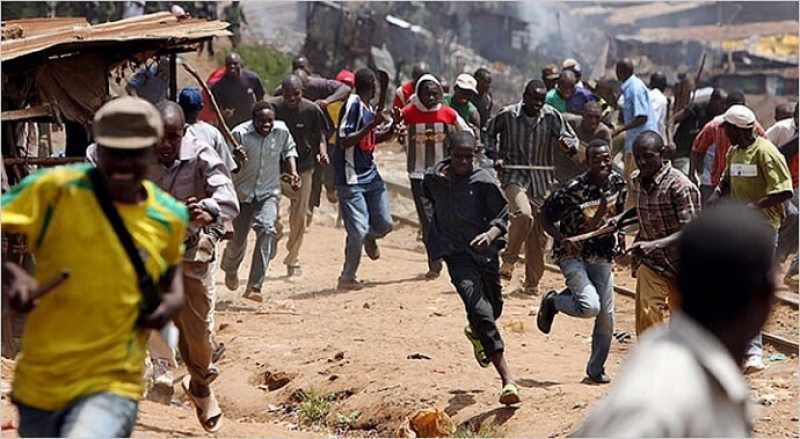 The Attack by Fulani herdsmen yesterday was a reprisal attack to what happened last two weeks in Shafaron Village of Numan Adamawa State. Last week information came to the people about the incoming of several Fulani and foreigners into the state and believed to have been camped around Mayo Belwa.

There was tension on Friday 1/12/2017 that the Fulani are set to attack Numan and its environs, as a result of this information alot of people packed and left the town for safety elsewhere. The same day there was clash between the MOPOL and the Fulani which led to the loss of lives of 7 MOPOL.

The main attack started around 6am yesterday (4/12/2017) where thousands of the herdsmen advance towards Lawaru village. These herdsmen are believed to be hired from other countries to carry out this massacre. They were heavily armed with different sophisticated weapon such as Machine Guns, RPG, AK 47, Knives, Matches, Bows and Arrow, one can wonder where they got all these fire arms from.

The villagers despite the attack went in good spirit with no gun but guts. They tried to counter the herdsmen but it was not possible. While the men remained behind to fight, hundreds of women were running into bushes. Within some minutes, the troop headed into Dong. People hid themselves watching the herdsmen burning their houses. Young girls between the age 12-14hrs were raped mercilessly by the herdsmen.

Aside that, a helicopter was hovering over, and giving them cover. At a certain point when the villagers noticed the herdsmen were running out of arms, they mobilized themselves to face the herdsmen. Not too long a military jet released a bomb on the villagers killing many of them. Most of the men killed were by the four air strikes while children and women were killed by the Fulani.

In total Seven villages have been burnt down, which are Dong, Lawaru, Kodomti, Shafaron, Bare, Nzoruwe, Shemun. The village head of Lawaru has been killed. More than 50 confirmed dead bodies recorded and thousands of villagers are left homeless. The Fulani were in their thousands clearing all this villages heading towards Numan which is believed to be their main target, but they got scared and turned back when their bullets was getting exhausted and despite all this that was happening there were no any security to counter them.

As a trained jet fighter you can’t make mistakes on a broad day light when the Fulani people are in thousands. There is no any re-enforcement from the Government. The Jets threw bombs and the impact of the bombs was one of the contributing factors that destroyed the villages.

All the statements from the government are false and political. We will quote from what the Emir of Kano said "I hope what happened in Mambilla and Numan will not go Unpunished ". This attack came some days after this statement.

The government should not force us to conclude that they have a hand in this attack. This is a carefully, Sponsored and calculated planned attack to kill the bachama people, and we will be tempted to say the government were aware of this attack and yet they were silent about it. The worst has already been done, we hope the lives of the people lost will rest in peace.