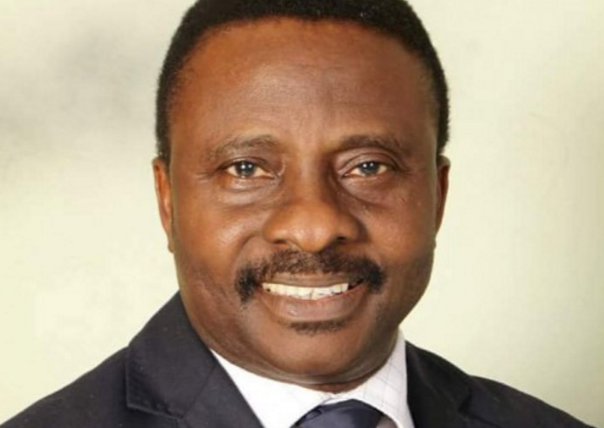 Your Excellency Sir, it was about two and a half years ago, precisely, July 2015 that we had the intention of paying this courtesy visit to you to congratulate you for becoming the President of our great country Nigeria. We however thank God that as Christian body in Nigeria, we are able to meet with you at last. So, what we intended to do then when we wrote to pay you courtesy visit, we are doing now by congratulating you for winning the election and for you to count on the Association to continue to pray for you for the Spirit of wisdom and understanding to be able to lead this country in the right direction until we get to our Promised land.

We wish to seize this opportunity as well to very much congratulate you for the miraculous recovery from sickness which took you away from the shores of Nigeria for many days. We as an Association took time to pray for you like other religious groups in this nation and we thank God that you are back alive. It was the love of Nigerians for you that kept all things intact while you were away and the able lieutenants that God gave to you who held the fort in your absence. May the affliction never arise again in the name of Jesus Christ our Lord and Saviour.

We want to advise you to manage your recovery well and take one step at a time. Delegation would be of help for you to totally recover and deliver the dividends of democracy to Nigerians.

Please allow us in this visit to pray for you because that is the major reason we are here today.

We want to appreciate you in the areas in which your administration is making giant strides since you came on board. The first of these is the recognition of corruption as a virus which has the potential of killing the nation if not stopped. Much more we salute your courage to confront it headlong as never done by any government in this nation before to the best of our knowledge and judgement. We do not want you to relent in doing this. The setbacks not withstanding, accomplishing the goal is the ultimate. However, we want you to fight corruption without fear or favour including those around you who may be like the ‘mixed multitude’ who went out of Egypt with the Israelites but were not Israelis. They caused harm along the way. Therefore, let there be no untouchable, hand those close to you that may be corrupt over to law enforcement agents as you have done to others for proper prosecution.

Secondly we want to commend you for your commitment to the flushing out of Boko Haram Islamic Fundamentalists from Nigeria. They had caused deep sorrow and damage to the nation especially many Christians, churches and facilities in the north—east in particular and the North in general.

We on the other hand observe that the murderous Fulani Herdsmen who were previously allowed to ply their trade in many communities in Nigeria have become a menace to many communities. The Christian communities of Benue State, Southern Kaduna, Enugu and a host of others have been on the receiving side on this. Recently I went to a village called Ancha in Bassa Local Government of Plateau State where 21  Christians in a village were killed overnight by Fulani Herdsmen. My church in that village lost 20 members out of the 21 and we gave them mass burial. It was a gory sight to behold. The most painful and baffling thing about it was that after that attack, they came to the same area again and killed another 24 people with none of them arrested by the enforcement agents. What a complicity! Why are the Fulani herdsmen devastating communities without being arrested? Why are they not prosecuted? Why was the source of their ammunition not investigated? Why do they roam about with guns without being arrested? All these are begging for the quick attention of the President so that the people they are attacking also might not seek self defence which may lead to the breakdown of law and order in the nation.

Thirdly, we want to commend your administration for the recovery of some of the kidnapped Chibok girls after some years of incarceration by the insurgents in the north—east. We are pleading with you to intensify more efforts to recover the rest who may still be alive before their lives are completely messed up. Equally, we sent a special appeal to the government and the Inspector General of Police in particular to help us recover twenty Borno women that were kidnapped by Boko Haram while going to bury their relative who died outside Maiduguri. Up till now, we did not hear anything over the matter from the government neither was our letter acknowledged. We are renewing our appeal again for the recovery of those women who were all Christians.

In a nutshell, the following are the issues the Christian Association of Nigeria wants  Mr. President to address without delay.

1. Withdrawal of Nigeria from Religious Organizations.

We call on the Executive and Legislative arms of government  to withdraw Nigeria from the Organisation of Islamic Cooperation and from other international religious bodies and treaties Nigeria signed with such religious organizations because it violates the secular state of the nation as enshrined in the constitution of Nigeria and further violates government's non-partisanship in religious matters as enshrined in the same constitution. The sanctity of the constitution must be kept for Nigeria to survive as one nation.

2. Issuance of Certificate of Occupancy to Churches in the North.

We call on the Executive and the National Assembly to prevail on States in the North to issue Certificate of Occupancy to churches in the region. Many excuses are presently being given by State Governments in the North to deny Christians the right of building their own places of worship. Recently, Jigawa State Government pulled down some church structures under the guise that they did not have building permit. The truth of the matter as obtained from the chairman of CAN in the State was that the churches had applied for permission to build for not less than a year or more without any response. Do the Christians in the North not have the right to build their houses of worship and serve God without fear or favour? If Nigeria is one country, this type of religious discrimination must come to an end.

and We declare the inability of the State Governments to pay workers’ salaries and allowances as at when due as unacceptable and call on the Federal and State Governments to work together to address this as quick as possible. This would step the tide of crimes and suicide that are increasing all over the nation.

5. Breakdown of Infrastructure in the nation

We further urge your administration to address the breakdown of infrastructure in the nation such as road construction, provision of uninterrupted power supply and adequate funding of health facilities so as to stop the untimely death of our people and medical tourism abroad.

We call on the Federal Government to declare a state of emergency on unemployment in the nation and to set up a machinery towards the provision of employment for graduates. It is a time bomb that could be devastating if not quickly attended to.

7. Criminal Activities and the need for more police

We observe that the criminal activities that are on the increase in the land should be addressed more squarely. The police should be more adequately equipped in policing the nation. More policemen at the same time should be recruited as the present number is too low to cope with the large population of the country.

Finally, we request for the  revival of the Nigerian Inter-religious Council, (NIREC) which in the past had fostered interaction and promoted religious harmony between Christian and Muslim leaders in the country whose meeting logistics were to be provided by the government. Government's position that there is no money to facilitate the convening of the meeting is not good enough. If there is no money to build peace, we believe that it would be more costly  to prosecute war.

We thank Mr. President for creating time to listen to us and we hope that this type of parley would be taking place more regularly for the general good of our nation. We believe in one united Nigeria where there is justice, fairplay and mutual respect.