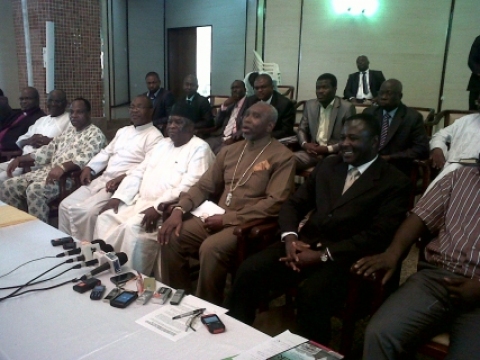 Leaders of the Christians Association of Nigeria (CAN) today gave a final warning to President Goodluck Jonathan put an end to the insecurity in the country or face down the the consequences.

Speaking through its president, Reverend Ayo Oristejafor at a press briefing after a high level meeting of the body in Abuja, CAN charged Mr. Jonathan to find a lasting solution to the senseless killings and bombings in the country.

Mr. Oritsejafor said Christians would no longer fold their arms and watch these criminal killings continue.

According to him “we are making the final call, I quote, the last call to the Government to stop this madness once and for all”.

The Full Text OF The Briefing:

You will recall that our last press conference of Tuesday,March 6,2012,we told the nation that the bombings and killings of innocent Nigerians may be termed senseless but that it is not without a sense for those sponsoring the act. We also said the killings and bombings were being done according to their plans in order to instil fears with the subsequent aim of eradicating religious freedom, democratic liberties with the church and Christianity as its primary target.

The Nigerian Nation and the international community has been witness to the step by step escalation of violence against innocent citizens with the Christian and the Church suffering the greatest loss. We have persistently pleaded with Government to take courage and act to stop the surge of terror. At this point in the unfolding insecurity challenges, it has become irrelevant whether the root cause is political, religious, ethnic or ideological. The fundamental issues are that the intimidation, killings, bombings and wanton destruction of lives and properties must stop immediately.

As President of the Christians Association of Nigerian (CAN) my first call to all peace loving Nigerians is remain calm in the face of all the insecurity challenges as I am aware that the greater part of the overall design is to instill fear in the populace. I will now make final call to Nigerian Government to use all resources available to it to clearly define and neutralise the problem as other nations have done. The Church leadership has hitherto put immense restraint on the restive and aggrieved millions of Nigerian but can no longer guarantee such cooperation if this trend of terror is not halted immediately.