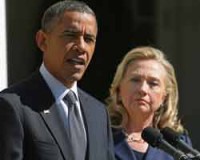 FRESH pressure is mounting on the US President Barack Obama and the outgoing US Secretary of State Hillary Clinton to designate Nigeria’s Islamist group, Boko Haram, a Foreign Terrorist Organisation (FTO) before the end of Obama’s first term next month.

At the White House, an ambitious effort has been launched by a team of several US groups led by Jubilee Campaign and supported by the Christian Association of Nigerian-Americans (CANAN) to mobilise thousands of Americans to sign a petition addressed to President Obama, demanding the designation.

According to the petition, already posted on the White House website, the organisations and the petitioners observed that despite all the uncontested evidence on the activities of Boko Haram, “the US has refused to designate Boko Haram a Foreign Terrorist Organisation.”

The petition, which has to get 25,000 signatures by December 29, to have the US President respond to it, stated that in the last three years, Boko Haram has killed an estimated 3,000 Nigerians, adding, “they have directly targeted helpless Christians, and any Muslims who dare to disagree with their genocidal ambitions.”

CANAN in a statement said it was mobilising the over 1,000 US-based Nigerian churches to get their members to endorse the petition within the time limit, so as to get a response from the White House.

Opening up the White House website to Americans to petition the US government is one of the initiatives of President Obama to bring the US government closer to the American people. But his administration has been reluctant to go after Boko Haram as a group.

Rather in June, the US government designated three leaders of the group as terrorists, but fell short of declaring the entire group an FTO, a situation the President of the Christian Association of Nigeria (CAN), Pastor Ayo Oritsejafor described in July at the US Congress as “hypocrisy.”

Similarly, at the US Senate late last week, an amendment to a bill sponsored by Senator Scott Brown, a Republican from Massachusetts State, was passed demanding that the US State Department should “report on the designation of Boko Haram as a foreign terrorist organisation, and for other purposes.”

The US House of Representatives version of the same bill, sponsored by Congressman Pat Meehan, is being revived, according to the Congressman’s office, which is working with CANAN, to shore up national support for the bill .

However, the Nigerian Ambassador to the US, Prof. Ade Adebowale, is known to be working closely with members of the US Congress to avoid the designation of Boko Haram.

He is arguing to US Senators and Representatives that while Boko Haram must be stopped, a designation may not be the right approach.

It will require both US houses of Senate and Representatives before the bill can be forwarded to White House for signing into law.

But one of the US groups working with Senator Brown’s office and in Congress generally to push the bill, Frontline Missions International, is expressing optimism that with the passage of the bill in the Senate, a new onslaught has been launched against the indecision of the US State Department on the issue of designating Boko Haram.

According to John Hutcheson of Frontline Mission International, “we have been lobbying the US Congress on this matter since the State Department has been unwilling to designate Boko Haram, and this is great news,” (passing of the bill in the Senate recently).

Legislative Aide, Michael Spierto, said Congressman Meehan is seeking co-sponsors to reintroduce his concurrent legislation in the US House, demanding designation of Boko Haram by the State Department as an FTO.

Spierto added that Meehan and CANAN would soon do a joint press statement “in order to call attention to Boko Haram and why the Congress bill on the matter is necessary.”

The US groups pressing the issue of Boko Haram are, however, not focusing only on the petition drive and lobbying the US Congress to legislate; a number of them have also submitted a legal brief to US Secretary of State Clinton, showing how legally Boko Haram has met the US legal requirement for designation as an FTO.

The legal brief running into 66 pages says, “Boko Haram has threatened US interests and attacked US citizens,” already.

The brief noted that one American, who is a UN official, survived the attack on the UN Building in Nigeria in August 2011, while another US official escaped.

Author of this article: From Laolu Akande, New York